Down and Out in Paris: Orwell's Fact or Fiction?

George Orwell returned to England on leave from his posting as a colonial policeman in Burma, at the end of August 1927. In England he could say what he thought, and it felt better to him after silently serving and loathing imperialism for five years.

After a month's holiday, he told his family he was going to resign his post. His father had served his entire career for the Empire in its Indian opium monopoly. Orwell's family were horrified to learn that he was giving up a solid government job worth £660 annually — to be a ‘writer.'

Orwell was so determined to leave the Imperial Police that he cut his eight-month fully-paid sick leave short, sacrificing nearly £140; a considerable sum in 1927. 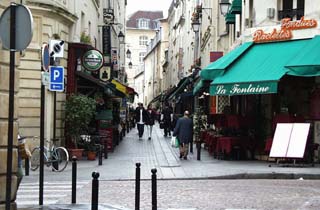 [From the corner of Mouffetard, the Rue du Pot de Fer in the Quartier Latin.]

He quickly moved from comfortable suburbia to a cheap, unheated room in London's Portobello Road. When friends realized he was using a candle for warmth, they found him an old oil stove.

His over-respectable landlady did not know that Orwell was searching for ‘the poorest of the poor’ in London's East End, disguised as a tramp. Worried at first that his public-school accent would give him away, he found that nobody saw beyond the shabby clothes.

He went out on three-day excursions to London's outskirts; sleeping in flophouses and dormitories for the unemployed. In the beginning his intentions were vague, but were definitely based on Jack London's ‘The People of the Abyss,’ also set in East London.

But he wasn't truly ‘down and out.’ He was there as a visitor, an observer; when he had enough he could wash his face and return to his own semi-respectable room.

This, he tired of. Seeking extra inspiration, in the spring of 1928 Orwell moved from the Portobello Road to a cheap hotel in the Rue du Pot de Fer, just off the Rue Mouffetard in Paris' Quartier Latin.

At the time the narrow street was ‘cobbled and dingy,’ the hotel's walls were ‘thin,’ and dirt and bugs were everywhere. As crummy as it was, it wasn't — and still isn't — far from the Jardin des Plantes, the Panthéon and the classier boulevards of Saint-Germain, Saint-Michel and Montparnasse.

Hemingway and his first wife had lived not far away, for a time in 1922; on the other side of the Place de la Contrescarpe, in the Rue du Cardinal Lemoine.

In 1928, when Montparnasse was still having its decade-long party, attended by a few artists and many impostors, and Samuel Beckett was beginning his two-year stint as a ‘lecteur’ of English in the nearby Ecole Normale Supérieure, Orwell circulated in an altogether different Paris.

He said the Jardin des Plantes was so infested with rats that they almost became tame enough to feed by hand; until they were such a nuisance that cats were imported to wipe them out. 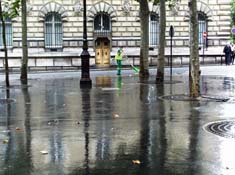 [Sweeping up after the marché in the Place Monge.]

Meanwhile, in his book ‘Down and Out in Paris and London,’ the tone was more solemn. His room was burgled and his money was stolen. Nearly penniless, what little he had ‘oozed away’ and eventually went hungry for three days.

The effect of this he described as, ‘hunger reduces one to an utterly spineless, brainless condition, more like the after-effects of influenza than anything else.'

The Paris part of ‘Down and Out’ is mainly about Orwell's last three months in Paris, in the period before he returned to England just before Christmas in 1929. Earlier in the year, he went into the Hôpital Cochin with a bad attack of bronchitis, which turned out to be pneumonia.

In the hospital he spent three weeks in a public ward with 60 other patients. About this stay, it was later described in his essay ‘How the Poor Die.'

In late 1928, two different articles he'd written were published on the same day; one in Paris and the other in London. Early in 1929 a literary agent in London became interested in Orwell's work, and they met in Paris.

The agent gave Orwell some advice about fiction — ‘cut the tedium and put in some action’ — but didn't manage to place any of the pieces written by Orwell.

Although the agent was encouraging, the meeting in April was the high point of his career as a writer in Paris, and none of the stories he wrote while here were ever published.

His last article, bought on the day he left the hospital, was published by ‘Le Progrès Civique’ in May. Near the end of September he wrote to Max Plowman, the editor of London's ‘Adelphi,’ bluntly asking for information about a story he's sent in.

It was after this time that Orwell was robbed and became ‘down and out.’ He and his pal ‘Boris’ pawned their overcoats, and ‘Boris’ eventually helped Orwell to get a miserable job as a ‘plongeur’ in the depths of a fancy Paris hotel. 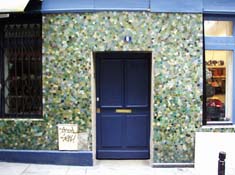 In a classic move — I've done this too — Orwell went along with ‘Boris’ scheme to get ‘much’ better conditions and pay by working in a small restaurant, with a mainly Russian clientele.

This turned out to be worse — it really was — and Orwell finally wrote to a friend in England, to ask for a bail-out. The friend came through with passage money, and Orwell gave a day's notice to the Russians and fled.

But. But, what is fact and what is fiction?

Orwell had an aunt living in Paris and they were on good terms. She was not well off, but she did manage to give him some help. She gave him money for seeds, but suggested he borrow or steal gardening tools. It is likely he need not have starved for three days.

In ‘Down and Out’ his money is stolen from his room — but it is possible that the thief was Orwell's goodtime girlfriend Suzanne, or she was helped by her other boyfriend.

Did his passage money come from a friend, or did it come from Max Plowman in late November, after the ‘Adelphi’ had decided to publish Orwell's piece about tramps?

In 1989, a first edition presentation copy of ‘Down and Out’ given to a friend turned up. Orwell had personally annotated its margins 16 times, usually with the phrase, ‘this happened very much as described.'

When I first read ‘Down and Out in Paris and London’ I thought it was all true. Even now, I know it was true enough.

The Rue du Pot de Fer started out as an alley, which was called ‘Prêtres’ in 1554, then ‘au Prêtres’ in 1559. In 1603 it was known as the ‘Bon-Puits’ which has led people to think it had something to do with the fountain at the corner with Mouffetard which was renovated in 1671. 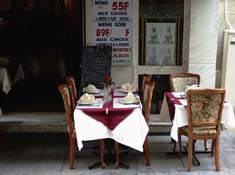 [These tables in the Rue du Pot de Fer did not figure in Orwell's Paris ‘feast’.]

The fountain replaced a simple well, which was probably appreciated in this always populous quarter. Sometime about 1625 the street acquired its present name, but it is not known if it refers to a cooking utensil or a fireman's helmet.

In the second paragraph of ‘Down and Out’ Orwell sums up the narrow street with this little dialogue:

‘Madame Monce: “Salope! Salope! How many times have I told you not to squash bugs on the wallpaper? Do you think you've bought the hotel, eh? Why can't you throw them out of the window like everybody else? Putain! Salope!”

The woman on the third floor: “Vache!”

Today, the fountain still begins the street, which otherwise doesn't seem to be infested with bugs — but it does have a lot of restaurants.

There is also no grand plaque marking the location of Orwell's Paris residence; even though in the forward to the French edition of ‘Down and Out’ Orwell wrote that he had ‘no animosity’ towards Paris, and had ‘very happy memories’ of it.